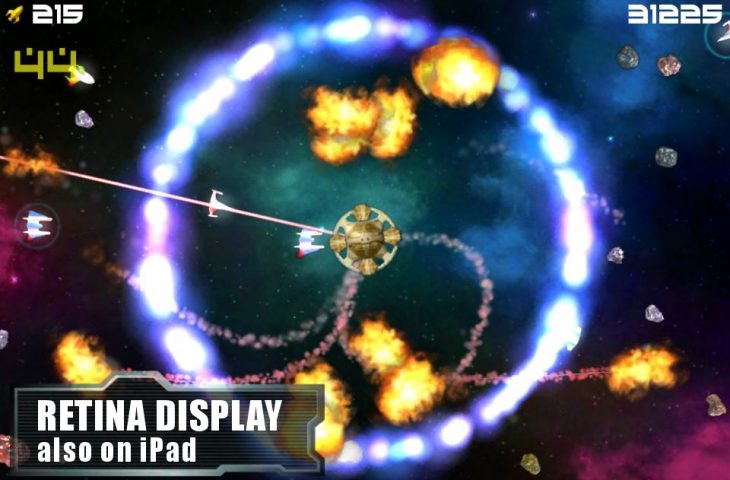 We’ve told you all about Tapsteroids before – the fast-paced action-shooter from the two-person team that is UNAgames. Tapsteroids was released just a few days ago on September 1st, and it’s already being featured by Apple in their ‘New & Noteworthy’ section of the App Store.

To celebrate the achievement, UNAgames has made Tapsteroids FREE, but for today only, so if by any chance you haven’t stumped up the $0.99 yet, now’s the time to get it…

“This fast-peaced space action shooter is a tribute to the classic arcade games in the era of touch. The player is assigned the important task of protecting navigation routes from dangerous storms of asteroids that infest the space, ensuring the safety of all spacecraft operating in his area and landing to his space station.
After the first short levels to “warm up”, the game begins to get complicated and be very addictive: incoming asteroids multiply, follow unexpected trajectories, split into smaller and faster meteors, while spacecraft continue their landing to the space-station.

Surviving in Tapsteroids requires skill, strategy to manage the ammunition of the more powerful weapons (only the standard missiles are endless), ability to calculate the timing of the missiles following a parabolic trajectory and to quickly identify which are the asteroids that come into the most dangerous collision route with the spaceships and your space-station.

We’re big fans of the work UNAgames is doing, and for the outlay of absolutely nothing, we suggest any fans of the genre give Tapsteroids a whirl.

What have you got to lose?