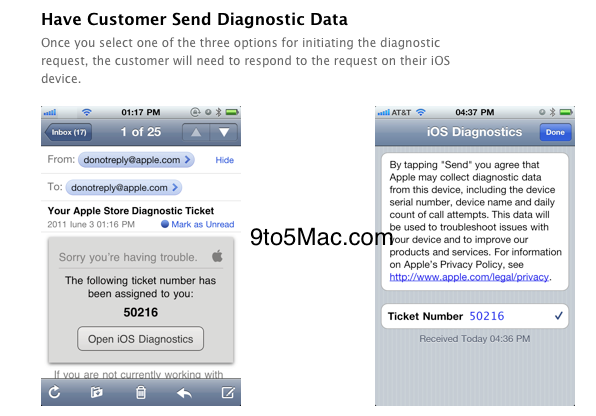 We’ve been hearing little tidbits here and there that point to a new way for Apple to diagnose issues with iPhones, iPads and iPod touches. First, we reported on internal messages being sent to Apple dealers that mention a tool for remote retrieval of logs and error files from devices, and then a patent popped up that ran along very similar lines.

Now, more details have emerged, with 9to5Mac confirming that Apple is indeed planning to roll out a new diagnostic system, and that it will be coming online slowly over the coming months…

The new system revolves around an email of sorts being sent to the iDevice in question and a link being tapped. This link will allow a diagnostic report to be sent to Apple, ready for a Genius to analyse.

“iOS Diagnostics sends an email to the iOS device or provides a manual URL that prompts the user to allow a diagnostic report to be transmitted to Apple. iOS Diagnostics will display that report within GSX in near real-time. It’s that simple.”

GSX is the system Apple uses internally for managing AppleCare repairs, and the new diagnostic tool would see information from a faulty iPhone or other iDevice being sent directly into GSX in real-time.

“There has never been an easier way for iPhone, iPad, and iPod touch users to give service providers the information they need to troubleshoot and diagnose iOS devices effectively. Users benefit from a faster and more accurate diagnosis. The in-depth information that iOS Diagnostics retrieves can be invaluable to technician’s troubleshooting efforts.”

Details on just what will be available to Apple employees via the new diagnostics remain sketchy, though documentation mentions usage patterns, low memory warnings, and temperature warnings.