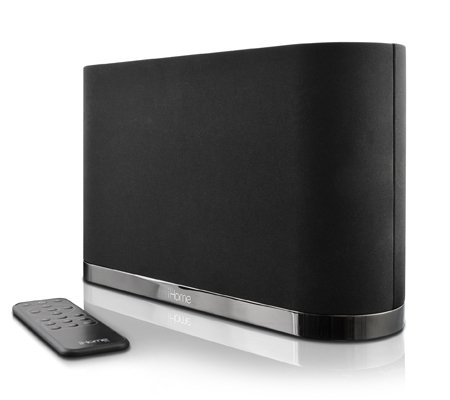 iPhone and iPod docking station/speaker combos are nothing new – they’ve been around forever and come in a wide range of shapes and sizes, with models to fit every budget. iHome has taken the tried and tested formula that we’ve all been using for so long, and added AirPlay to the mix to create the iHome iW1: an AirPlay-equipped wireless audio system.

Set to go on sale on September 26th, the iHome iW1 will retail for $300, according to Engadget…

The speaker has a a couple of party tricks up its sleeve, one of which is a rechargeable battery. Once charged via a docking station, the iW1 can be picked up and moved anywhere you want, and as long as it’s within range of your WiFi network, your music, podcasts or audio books will continue to play with no interruption.

“Play your music, in any room, wirelessly. The iW1 is the ultimate audio experience for iTunes and iPad, iPhone, and iPod enthusiasts, using the latest technology from Apple.

Using AirPlay wireless audio streaming technology, the iW1 enables music anywhere you have a home Wi-Fi network. The iW1 can receive music from AirPlay sources such as iTunes, iPod touch, iPhone, and iPad. The iW1 also supports charging and local audio playback via USB by using the USB sync cable that comes with new iPods and iPhones.”

Audio is handles by three two-inch woofers and two one-inch tweeters, and the entire unit weighs 6lbs according to iHome’s technical specifications.

The inclusion of AirPlay makes for an interesting departure from having to have your iDevice docked while listening to audio, meaning it can be used for other things instead of being tethered to your sound system.

We also like the idea of being able to stream music from iTunes on a computer to multiple iW1 speakers simultaneously. Hopefully Apple will add this feature to iOS at some point in the future, too.

Are you tempted by the iHome iW1’s sleek looks and AirPlay support?