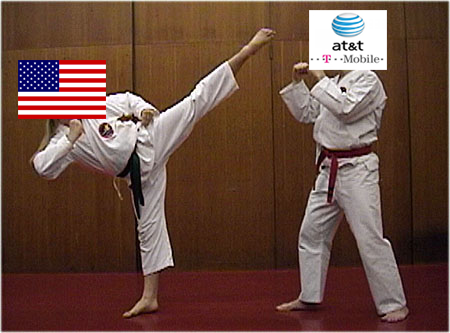 Much like Google’s buyout of Motorola Mobility we told you about a few weeks ago, I don’t think anyone saw the AT&T/T-Mobile deal coming. The nation’s second largest carrier unveiled it’s plans earlier this year to acquire the operator for $39 Billion.

The acquisition would leave only three major wireless companies in the US, angering both customers and other carriers along the way. But with the industry’s long history of buyouts and mergers, I think most folks just accepted that it was going to happen, until now…

Bloomberg just dropped a bombshell, claiming that the US government just filed court papers in Washington to block the proposed merger between AT&T and T-Mobile USA.

“The Justice Department complaint was filed today in federal court in Washington. The U.S. is seeking a declaration that Dallas-based AT&T’s takeover of T-Mobile, a unit of Deutsche Telekom AG (DTE), would violate U.S. antitrust law and a court oder blocking any arrangement implementing the deal.”

Wow. Whether you were for or against the merger, I’m not sure anyone expected the government to make a move like this. Especially since acquisitions like this happen so frequently in the wireless industry. (Alltel/Verizon anyone?)

So what happens if regulators end up rejecting the transaction? Word on the street is AT&T offered T-Mobile a substantial breakup package if the deal falls through, valued around 7 billion dollars in cash and assets.

While I’m sure this has Sprint CEO Dan Hesse and T-Mobile customers grinning from ear to ear, I’m wondering how pissed AT&T has to be right now. It’ll also be interesting to see how, if at all, this affects T-Mobile getting the iPhone this Fall.

What do you think of the move by the US government? Was it the right one?