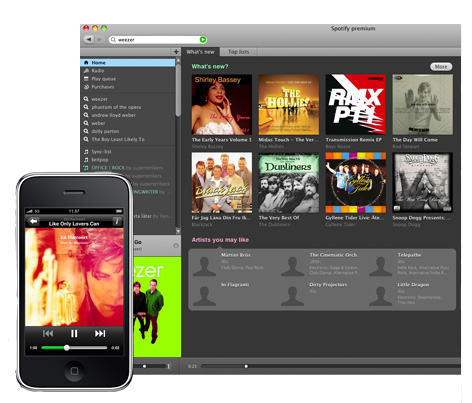 Online music streaming service Spotify has launched a new API that will allow independent iOS developers to bring the service to their own apps. The API, called Libspotify, means we could see Spotify built into all kinds of iPad, iPhone and iPod touch applictions moving forward.

While there is currently no word on whether the new Libspotify API will find itself to Android, it’s perhaps interesting to note that the API is offered on a none-commercial basis, meaning paid-for apps will not be allowed to use it…

“Today we are announcing a great addition to the Spotify Platform. The Spotify Embedded Player libspotify 9 is now available for iOS.

We hope this will enable a new category of iPhone, iPad and iPod Touch applications with Spotify inside and allow for more immersive music experiences within iOS apps.”

Spotify has recently become a truly worldwide brand, with the service finally launching in the United States a couple of weeks over a month ago after what felt like years of legal wrangling and deal-brokering. Offering much needed competition to the likes of Rhapsody and Rdio, Spotify has seen a mixed reaction State-side, with many left unimpressed with the catalogue of 15 million tracks, with others seemingly hailing it. If ever there was proof that beauty is in the eye of the beholder, than this is it.

What this could mean in the long-term is independent developers being able to create Spotify iPad apps, or indeed third-party iPhone clients, though they would only be available to Premium subscribers, according to Spotify. The company has dragged its feet in creating an iPad version of its iPhone application so far, with many holding off stumping up the cash for that reason alone.

Now we can only sit back and await the inevitable influx of mediocre Spotify iOS app clones.

If you’re going to make an iOS app for Spotify, you know where to find us!