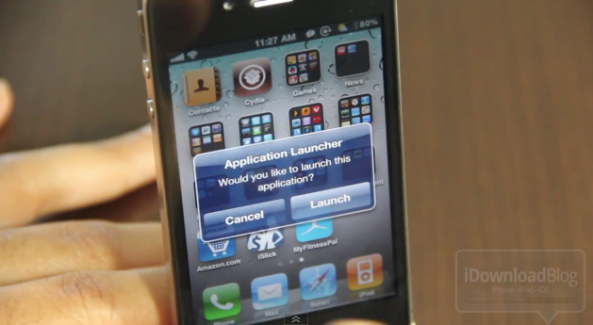 It’s no secret that many of the tweaks found on Cydia are close replicas of already existing tweaks; LaunchConfirm is no exception.

Heavily borrowing from another recently released jailbreak tweak by the name of DoubleTapToOpen, LaunchConfirm aims to accomplish similar results, albeit using a slightly different method.

Both tweaks aim to prevent the end user from accidentally launching apps. DoubleTapToOpen requires a double tap to launch apps, while LaunchConfirm adopts a confirmation dialogue box in order to do so.

In the end, both tweaks are very similar, as you’ll see in this full video walkthrough…

There’s really not much to state about LaunchConfirm that the video didn’t already cover in detail. It’s a simple tweak that aims to do one thing, and do it well.

It would be nice if the app included an exclusion list of certain apps that were able to launch without confirmation, but that appears to be outside of the scope of this tweak.

LaunchConfirm is available for free to all iPhone jailbreakers on Cydia’s BigBoss repo. If you happen to give it a shot, be sure to let us know what you think below.