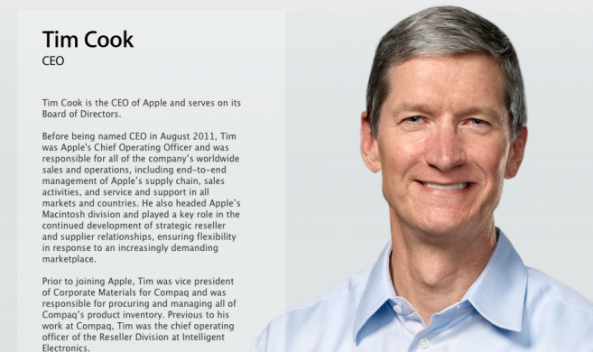 The entire tech industry was rocked yesterday as one of the world’s greatest CEOs said goodbye to his friends, employees and an entire community of fans. After a 13 year hot-streak, Steve Jobs stepped down from his leading position at Apple Inc.

Needless to say, tech pundits and analysts have been dreading this day for years. With Jobs gone, Apple’s future would be up in the air a bit. Who could replace him? No one could ever replace Steve Jobs. But someone has, and his name is Tim Cook…

It wasn’t that hard to figure out that Cook was eventually going to replace Jobs as Apple’s CEO. He’s played the part several times over the last few years during Jobs’ extensive absences. But even though we’ve been expecting it, it’s still scary.

Would Cook deviate from Jobs’ master plan? Would Apple change at all? Ars Technica just published an internal memo from Cook to Apple employees that assures everyone that the company won’t change a bit:

I am looking forward to the amazing opportunity as serving as CEO of the most innovative company in the world. Joining Apple was the best decision I’ve ever made and it’s been the privilege of a lifetime to work for Apple and Steve for 13 years. I share Steve’s optimism for Apple bright future.

Steve has been an incredible leader and mentor to me, as well as the entire executive team and our amazing employees. We are really looking forward to Steve’s ongoing guidance and inspiration as our Chairman.

I want you to be confident that Apple is not going to change. I cherish and celebrate Apple’s unique principles and values. Steve built a company and culture that is unlike any other in the world and we are going to stay true to that-it is in our DNA. We are going to continue to make the best products in the world that delight our customers and make our employees incredibly proud of what they do.

I love Apple and I am looking forward to diving into my new role. All of the incredible support from the Board, the executive team and many of you has been inspiring. I am confident our best years lie ahead of us and that together we will continue to make Apple the magical place that it is.

The letter is pretty standard, and covers all the usual business etiquette for replacing a leader. Show appreciation for being selected — check. Recognize and thank the predecessor — check. Reassure everyone that you were the right man for the job… check?

Several sites have pointed out that Cook’s letter lacked the enthusiasm and charisma that Jobs showed constantly, even in his writing. But maybe Apple doesn’t need another Steve Jobs. Maybe they’ll be just fine with a Tim Cook.

What do you think of Cook’s letter?