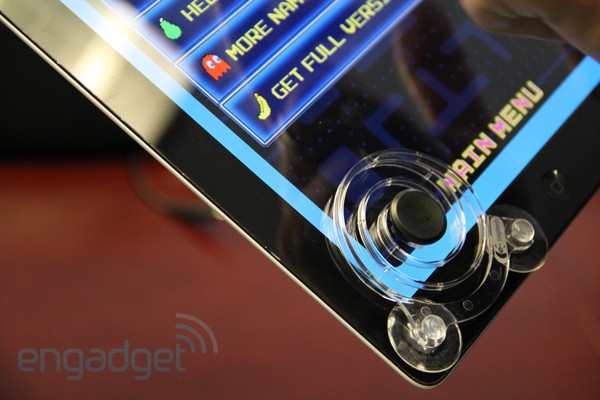 Even though Apple’s iPad has become something of a casual gaming heaven for many, its lack of any physical buttons can still be seen as a negative on occasion. Recognising that unavoidable fact, Logitech has taken to the drawing board/CAD machine, and shown off a new accessory that they hope will appease those of us who always prefer something hardware-based.

Logitech has announced a new joystick that attaches to an iPad via the magic of a suction cup. The design should make for easy attachment and detachment when you’re not going to be eating ghosts in Pac Man…

“The Logitech Joystick for iPad is the perfect gaming companion for your iPad or iPad 2. No one likes to lose a point or go down in defeat because their thumb misses the control area. The Logitech Joystick for iPad gives you a thumb-stick style game controller that you can use with just about any game with an on-screen joystick or d-pad. The device attaches to your iPad with suction cups that are easy to apply and easy to remove. And the coiled spring provides force feedback that automatically returns the joystick to the center position.”

The joystick resembles the buttons that the Sony PSP and Nintendo 3DS sport, rather than a conventional stick. The accessory will retail for $19.88 when it goes on sale later this year.