I have to admit, Apple’s iCloud service is pretty cool. Deep iOS integration, a cool web portal, and 5GB of free space. But what if you need more than just 5GB of cloud storage? The next step up is 10GB, and that’ll run you $20 a year.

The plans go all the way up to $100 a year for 50GB (55GB with your free 5GB). That might seem like a lot for file storage, but it’s on par with the competition. In fact, iCloud beats out the popular DropBox service in the bang-for-your-buck category…

In wake of iCloud.com’s beta launch on Monday night, MacStories has drawn up a nice little comparison between Apple’s cloud storage service and its major competitors. The report compares prices and usability between iCloud, DropBox, and SugarSync. 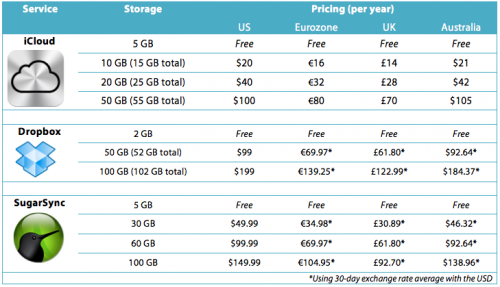 As you can see, Apple’s iCloud service beats DropBox in price per GB, although SugarSync wins the category. You’ll also notice that both SugarSync and iCloud offer more initial free space than the widely-used DropBox.

Now, onto usability. To be honest, all 3 services are easy to use — they’re just different. While DropBox and SugarSync use typical filesystems, iCloud hides all of that in favor of a friendlier graphic-based interface.

So which service will be top dog? Obviously, with system-level integration in OS X Lion and iOS 5, iCloud is an attractive option for Mac users. But as with all things Apple, some folks may not like iCloud’s limitations (ex: no drag-and-drop option).

What do you think? Which cloud service do currently you use, and would you switch to iCloud?