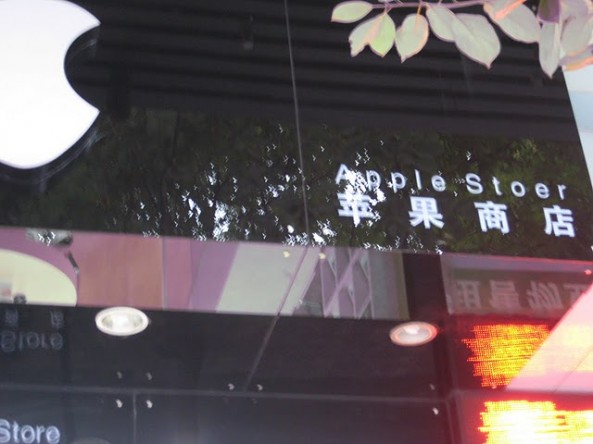 You may have heard about the fake Apple stores uncovered in Kunming, China. Essentially, unauthorized resellers were created identical replicas of Apple retail stores without Apple’s permission. As you can see from the picture above, some of them couldn’t get the company’s name spelled correctly, though.

Now it seems that Chinese officials (and oddly enough not Apple) have gotten word of these fake Apple store operations, and two stores in Kunming, China have already been shut down. We’re still waiting for Steve Jobs to pull out the big red button and nuke the rest of these stores off the map…

“Two of the five fake Apple stores in the southwestern city of Kumming identified by the writer on the Birdabroad blog last week have since been shut down by Chinese officials, according to a local government website there.

But Chinese officials said they would not be taking any action against the other three stores, which like the other two prominently displayed Apple signs and logos, because they did not find any fake Apple products for sale, according to a report by a local newspaper posted on the Kunming city government’s website. Apple has 13 official resellers in Kumming, but no official stores.”

One fake Apple store owner, Yu Cheng, claimed that he was doing Apple a “favor” by selling its products. He also says that an Apple store is actually really easy to replicate, and he compared it to a “school chemistry lab.” We’re sure the folks designing Apple’s upcoming Grand Central store do not agree.

The person to originally report this fake Apple store story has been contacted and told that similar stores exist in countries like Burma, Croatia, Columbia, Slovenia, Spain and Venezuela. Looks like Apple has a problem on its hands!