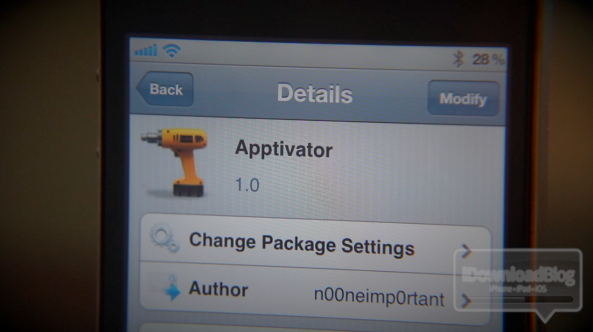 Apptivator…hmm, nice play on words there, if I must say so myself.

Wordplay aside, Apptivator isn’t just a cute name; it’s a fantastic jailbreak tweak that adds depth to the still-useful, but long in the tooth, Activator.

Activator is the staple jailbreak tweak that allows you to perform actions on your iPhone using a variety of methods from swipes of the status bar, to double taps on the Home button.

It’s an infinitely useful tweak that many other tweaks rely on. Apptivator is sort of like a plug-in to Activator — it allows you to invoke Activator actions simply by double-tapping an app icon of your choice.

Check inside for a video explanation and demonstration of Apptivator…

Having Activator actions assigned directly to app icons opens up a wealth of potential as described on the tweak’s description in Cydia. For instance, it’s entirely possible to launch specific features of apps just by double tapping the app in question.

One good example of this is with biteSMS. With Apptivator, you could assign the quick compose functionality directly to the biteSMS app icon, therefore allowing you to invoke quick compose with a double tap of biteSMS’s app icon.

That’s just one of many scenarios; I’m sure you guys will come up with some additional innovative uses in the comment section below.

Apptivator can be purchased on Cydia for $2.00. Let me know, how would you use Apptivator? Do you see it as being useful at all?