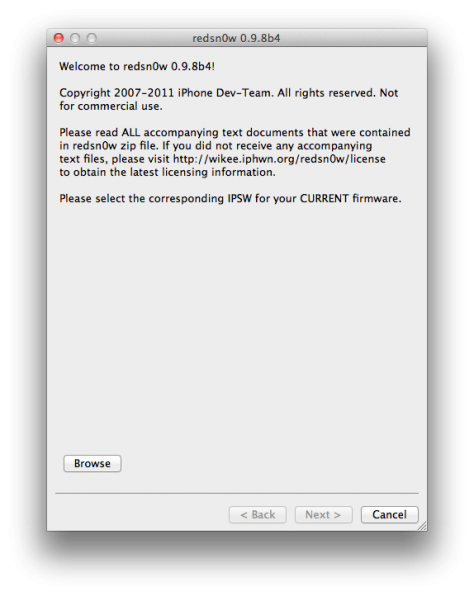 Apple released iOS 5 Beta 4 yesterday to developers, and the Dev-Team has already released an update to the jailbreak tool RedSn0w for a tethered jailbreak on iOS 5 Beta 4.

This jailbreak is not recommended for non-developers, and RedSn0w will need to be used each time you reboot to re-jailbreak your iDevice.

“Update #4: In conjunction with iOS5 beta4 being released to iOS developers, redsn0w 0.9.8b4 is now available for jailbreak app developers (point the b4 redsn0w at the b4 IPSW).  Remember, it’s a tethered jailbreak right now so you’ll need to use redsn0w to boot into a jailbroken state at each power cycle.

NOTE: It appears that by design, the OTA update that became available starting with iOS 5 beta4 will *not* be automatically applied to jailbroken devices.  That’s a relief to those who don’t want to lose their jailbreak via OTA pushes.  If you’re jailbroken, you’ll need to use the standard iTunes method to get to iOS 5 beta4.”

Apple finally introduced OTA firmware updates for those on Beta 3 that wished to upgrade to Beta 4, and you can see how that works here. Luckily, OTA updates don’t automatically get pushed to jailbroken iDevices, but you’ll need to stay away from Beta 4’s OTA feature to keep your jailbreak. Just download iOS 5 Beta 4 like normal to your computer and apply the update manually in iTunes.

Jailbreaking with RedSn0w is still the same process, so refer to our ultimate RedSn0w tutorial. To jailbreak iOS 5 Beta 4, you’ll need to point the latest version of RedSn0w to your Beta 4 IPSW file.

To download RedSn0w 0.9.8b4 for the Mac or Windows, visit our downloads page.

Be warned that jailbroken beta firmware can tend to be very buggy, as iOS 5 Beta 3 proved to temporarily disable the use of App Store apps once jailbroken. It’s recommended that you only download and jailbreak an iOS 5 beta if you are a developer.

With that said, let us know how jailbreaking iOS 5 Beta 4 with RedSn0w works for you. If you come across any issues or interesting findings in Beta 4, send us a tip from our contact page.