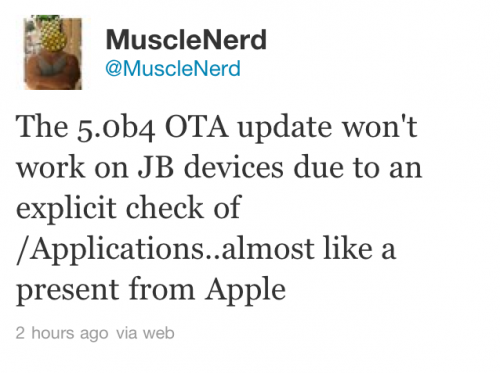 In case you missed the news, Apple seeded iOS 5 beta 4 to developers yesterday. The new software brings loads of bug fixes and minor updates, and it also introduced a major new feature. Today’s beta was the first firmware update that Apple’s pushed to devs over-the-air.

Although things got off to a rocky start, a majority of the folks guinea-pigging the OTA updates seemed to be happy with the end result. However, if you have a jailbroken iDevice and tried updating to the new iOS 5 software, it was probably a different story…

As it turns out, anyone on iOS 5 Beta 3 with Cydia installed was blocked from installing the new firmware wirelessly. As usual, it was Dev Team member MuscleNerd who confirmed the news:

“The 5.0b4 OTA update won’t work on JB devices due to an explicit check of /Applications..almost like a present from Apple.”

Apparently Apple’s OTA software is checking the /Applications folder to see if it’s a real directory, which it isn’t in a stashed jailbreak. Though jailbroken users are still able to update normally through the standard iTunes sync, it does present a red flag.

This isn’t Apple’s first move in iOS 5 to thwart jailbreaking. Remember when we told you about the Blob Monster Apple implemented to stop users from downgrading their firmware? Apple has definitely upped the ante in iOS 5 for iDevice hackers. How will the jailbreak community respond?