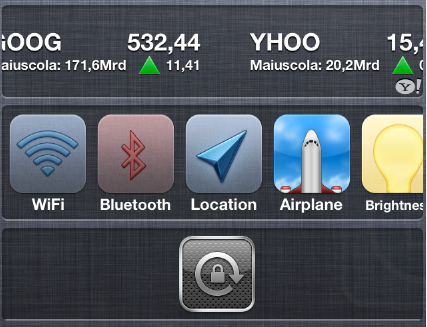 It seems as though it’s been a while since we’ve seen a new widget for iOS 5’s Notification Center. When the beta first launched, it was like we were seeing one a day if not more. Now it seems more like one per week.

Assuming Apple doesn’t allow 3rd party widget development right away, it would be a safe bet to assume we will see a lot more of these pop up in Cydia once iOS 5 is released (mostly due to Apple’s current NDA on iOS 5). But to help tide us over until then, here is ScreenLocker…

ScreenLocker is apart of the new BigBoss repo dedicated to iOS 5 beta-specific jailbreak packages. Once downloaded, it simply installs an Orientation Lock button into your Notification Center pull down menu. This way you can lock and unlock your screen’s orientation on the fly.

To point out the obvious, Apple already provides quick access to the Lock Orientation function on iDevices through the multitasking bar. This icon would be more suitable as part of a cluster of toggles like in UISettings. The single button just looks tacky.

However, for folks that constantly lock and unlock their display from being manipulated by movement, this utility could prove rather useful. If you are jailbroken on iOS 5 and want to try ScreenLocker out, simply add http://thebigboss.org/ios5beta/ to your repo list and do a search for it.

What do you think? Worth downloading, or waste of space?