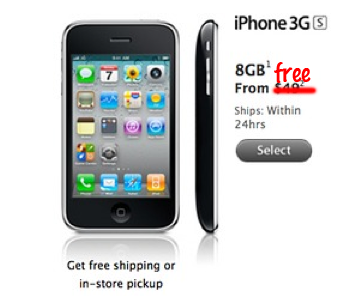 We’ve been hearing a lot of rumors suggesting Apple might be releasing a low-cost iPhone this fall. Analysts predict the timing is right for the Cupertino company to enter the low-end smartphone market and they love to speculate.

The latest gossip comes from Mike Abramsky of RBC Capital who sees things a little differently. The analyst believes we’ll see Apple offer a cheaper iPhone, but it won’t be a new model. He thinks the 3GS is the rumored low-priced smartphone…

“While a $49 iPhone is already available (AT&T), psychologically a $0 iPhone provides a compelling offer.”

Abramsky estimates that a free iPhone 3GS would add $7 billion of revenue and $1.82 earnings per share. He also thinks that offering an unsubsidized model for $399 could make headway into some prepaid markets where flimsy Android devices are all the rage.

It’s feasible for Apple to sell the 3GS at a $399 full retail because they could still maintain decent profit margins. It costs Apple $178.96 to manufacture the device and a little extra for processing and shipping.

Aside from dropping the price on the 3GS, the RBC Capital analyst also predicts we’ll see the iPhone 4 drop to $99, pending the launch of a new model. Apple has lowered the price tag on all previous iPhone models in wake of new releases, so this one isn’t hard to swallow.

As I mentioned above, I can see the iPhone 4 for $99 at some point, but a free 3GS? Why would Apple continue to push 2 year old hardware? Maybe Steve Jobs and company really think they are that far ahead of the competition. I guess I’d take a free 3GS before I’d pay for an Android.

What do you think of a free 3GS?