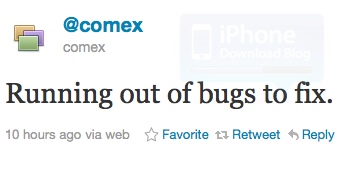 We know JailbreakMe is right around the corner. Comex keeps dropping hints at an imminent release but unfortunately there always seems to be bumps in the road. This time though, it appears that Comex is almost done ironing out the kinks of JailbreakMe.

In a tweet sent a few hours ago, Comex said he’s running out of bugs to fix, which seems like an indication that we might finally see an iPad 2 jailbreak sooner than later…

How many times have we been excited about the release of a jailbreak before? Too many times. Until JailbreakMe is officially out, I’ll do my best to keep my hopes low.

Is Sunday gonna be a Funday?