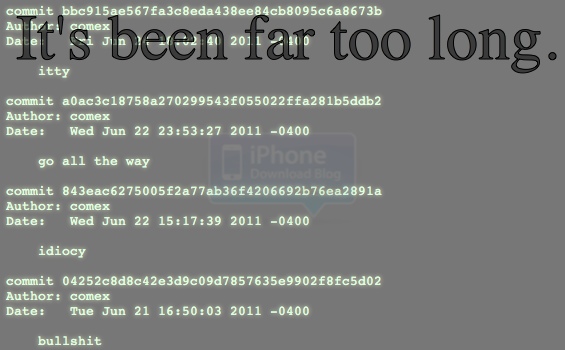 If you go to JailbreakMe.com right now you will be greeted with a bunch of data that appears to be some logs of some sort. I have absolutely no idea what all this mean but I am hoping one of you will figure it out.

With the release of JailbreakMe right around the corner, I wouldn’t be surprised if this was another clue of an imminent release…

Update: We’ve got a bit more of clarification about all this gibberish. iH8Sn0w told me that these are git commits that refer to GitHub. Additionally, fellow Twitter user @Cyclone321 tells me that “it looks like his source control commit history, which shows how long he has been working on it, commenting his code checkins”. These git commits go as far back as August 2010, which would mean that Comex has been working on that for about 10 months, which would explain why he says “it’s been far too long”. With this information on hand, I think the message behind this might not be that JailbreakMe is ready, but that Comex has been working his ass off on it for almost a year.

If you have more intel to provide on that, please feel free to leave a comment below.