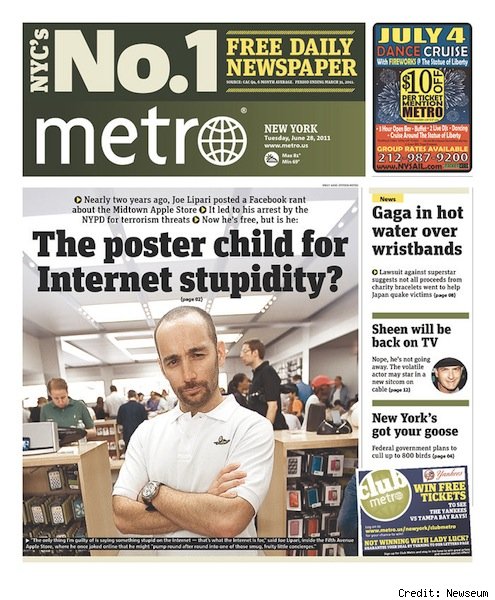 Although I’ve typically had enjoyable experiences with Apple Store staff members, that doesn’t seem to be the case for everybody. I’ve come across several stories where customers have left Apple Stores extremely upset with its employees.

One of the most interesting tales I’ve come across lately was featured in a recent TUAW article. If you haven’t heard the story of Joe Lipari and his infamous Apple Store-Facebook-rant turned felony, you might want to keep reading…

Joe Lipari visited the popular Fifth Avenue Apple Store in New York City seeking help with his iPhone. Unsatisfied with the service, the enraged customer took to his Facebook page to vent his frustrations.

While that might seem harmless to most people, his status update was a tad bit on the crazy side:

“Joe Lipari might walk into an Apple store on Fifth Avenue with an Armalite AR-10 gas powered semi-automatic weapon and pump round after round into one of those smug, fruity little concierges.”

A Facebook friend reported the threatening post to the local authorities, who later arrested Lipari and slapped him with multiple felony charges for making terroristic threats. “I posted a paraphrased quote from ‘Fight Club’ and within 95 minutes a SWAT team was at my door.”

The New York citizen faced up to 7 years in prison for what he claimed was a simple joke. Lipari spent the next few years in and out of court fighting the charges. “The plea deals got better every time, but I wasn’t going to accept any deal except ‘not guilty'”

This all happened back in 2009, but the New York Metro ran a profile on Joe Lipari yesterday outlining the incident. Though the felony charges were dropped earlier this year, Lipari might have to live the rest of his life known as “The poster child for Internet stupidity.”

Thoughts? Do you have a crazy Apple retail story?