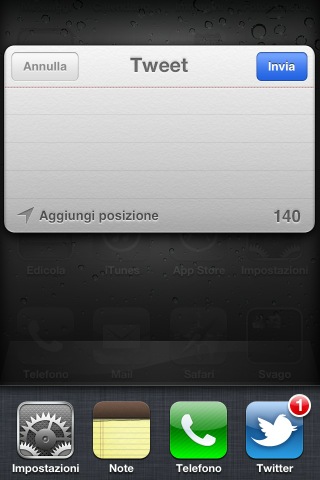 When Apple announced iOS 5 during its WWDC 2011 keynote three weeks ago, one of the standout features we were all drawn to was the twitter integration.

Promising to tie Twitter right into the operating system, iOS 5 has the potential to do some pretty cool things with one of the world’s favorite social networks, but, at least in the first two beta releases, iOS 5 doesn’t seem to make the most of the possibilities. Currently, the only real part of iOS to use Twitter is the Photos app, which allows the tweeting of images direct from the app.

It looks great, and works just as expected while also offering the ability to geotag tweets on the fly…

But we were hoping for something more, and as usual, the jailbreak community seems to be filling a hole left by the boys in Cupertino.

Qwertyoruiop, no stranger to iOS 5 tweaks, has been working on a new tweak that will allow tweeting, similar to that of Photos.app, but from anywhere in the OS according to iPhoneItalia.

This is the exact kind of thing we had expected to see when Apple first announced Twitter was coming to iOS three weeks ago, and we’re still hopeful that’s exactly what we’ll get in later betas of iOS 5. It’s good news that if Apple doesn’t give us system-wide tweeting though, at least the jailbreak community has our backs.

Qwertyoruiop’s Twitter tweak will not be released until the final version of iOS5 is in the public domain, unfortunately, so who knows – it might never actually be needed!