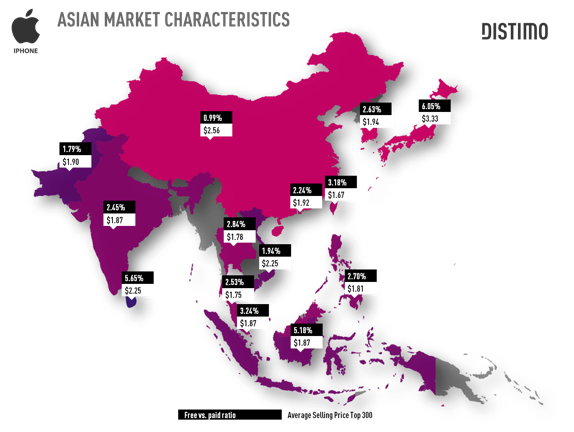 Distimo has released a new study that focuses on the iPhone’s App Store development in Asia. The analytics company examined data from 14 different countries, including China, to determine the App Store’s influence in the Eastern hemisphere.

The report’s findings placed China as the second largest market for Apple’s App Store, next to the United States. Interestingly, while many European countries are seeing decreases in App Store activity, countries like China are seeing exponential growth in App Store download volume.

China’s numbers are especially impressive, considering that Apple didn’t open an App Store for the world’s most populated county until last Fall. Not to mention that the countries telecom, China Mobile, has yet to give its 600 million customers approved access to the iPhone.

A recent report claimed that one third of all iPhones in China are jailbroken. That would make sense, considering the lack of availability on China Mobile. Strick regulations have hindered an agreement between Apple and the country’s carrier. However, things are looking hopeful. Apple’s own Tim Cook was recently spotted at China Mobile headquarters, and there are rumors of a deal being reached between the two companies. 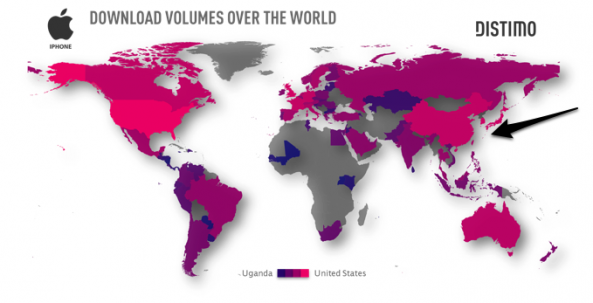 Distimo’s report shows that Asian markets are more likely to download free or lite apps, while Western countries are still well ahead in paid downloads. The average download volume of the top 300 apps in Asian territories combined is the same as the average volume in the U.S.

As the App Store grows in size and reach, it’s interesting to see how the world’s markets respond. Things are definitely looking up for Asia.

Do these numbers from Distimo surprise you? If you’re one of our Eastern readers, let us know what you think of this report.