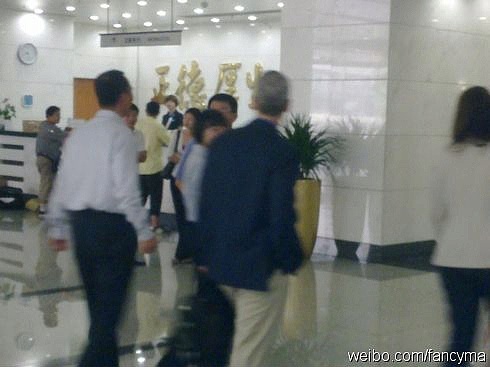 M.I.C. gadget is reporting that Apple’s Tim cook was spotted at a China Mobile building yesterday morning. If anyone’s wondering why Apple’s acting-CEO visiting the world’s largest wireless carrier is a big deal, let me break it down for you.

China Mobile has over 600 million customers and is one of the few major carriers left that does not offer Apple’s smartphone. The citing of the Apple executive has sparked tons of speculation around the web regarding his visit…

Tim Cook is Apple’s Chief Operating Officer, but is currently filling in as acting CEO of the Cupertino company. He was spotted in the lobby of China Mobile’s headquarters by a Chinese reporter for the First Financial Daily. She managed to get a picture of Cook, and posted it along with a brief description to her micro blog:

“This morning, around 10, Apple COO Tim Cook is spotted in the lobby of China Mobile’s HQ, accompanied by 7-8 people. Probably Cook is talking with executives from China Mobile to discuss bilateral cooperation for the iPhone. Both China and America flags are seen in the lobby, and Cook seems to by happy.”

Rumors on the nature of his visit seem to teeter back and forth between, ‘he’s there finalizing a deal to finally bring the iPhone 4 to China Mobile’s TD-SCDMA 3G network’, or ‘he’s just there for further LTE iPhone talks.’ One thing’s for certain, if you’re the stand-in CEO for a company like Apple, you don’t make a trip like this unless it’s important.

I personally think it’s too late for them to be talking about a 3G iPhone, although China Mobile’s ridiculously large customer base would certainly warrant Apple to do something out of the ordinary. Maybe Apple has found a way to make their next iPhone, which is expected to be world-capable, work with the carrier’s home-grown CDMA network.

The more likely scenario here is that Cook is there on 4G-related business. Reports last month suggested that Apple had reached a deal with China Mobile that would bring a 4G-flavored iPhone to the carrier’s upcoming TD-LTE network. It would sure be interesting to know what goes on behind closed doors.