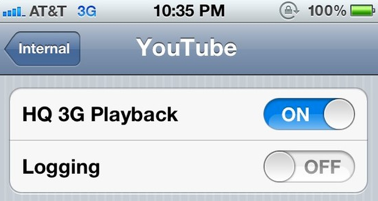 In case you were wondering if folks were done uncovering new features in iOS 5, think again. Out of the 200 new features Apple has added to iOS, I believe we are on like #70 or so.

The latest find comes from iDevice hackers @Chronic and @Sonny Dickson, who have managed to gain access to internal settings in iOS 5. Apparently the new iOS will not only offer FaceTime over 3G, but high quality YouTube playback as well…

The YouTube app, much like FaceTime, has been restricted by Apple in past iOS builds when not on a Wi-Fi network. Any videos streamed within the YouTube app while on 3G are reduced in size and quality.

Though jailbroken folks have had utilities like 3G Unrestrictor to get around this downfall for quite some time, poor network performance and vanishing unlimited data plans have kept high quality YouTube videos limited to Wi-Fi hotspots up to this point.

It’s important to note that although the feature currently exists, iOS 5 will likely undergo several changes between now and its scheduled fall release date. It’s quite possible that this little gem might not make it to the final build.

At any rate, between iMessage, iCloud and both FaceTime and YouTube apps going 3G, I can’t imagine what carriers are thinking about the major update. Hopefully they’ll be able to support all of the extra data traffic.