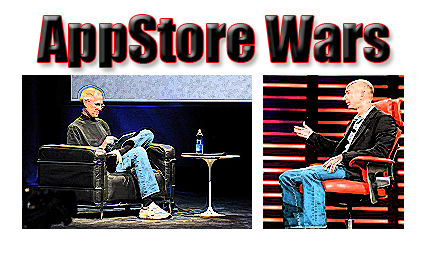 One thing is certain in the tech industry: If you ever become more successful than others feel you should be, you become an instant target for a lawsuit. And with the way some companies are performing right now, patent and trademark law seems to be a safe bet for a business.

A particular case that has been highlighted recently is the court battle between Apple and Amazon. While the Cupertino company is known for their fierce legal team, they may have a tough time proving that the term “App Store,” is solely their property…

Back in March, we reported that Apple filed a lawsuit against the online retailer over the use of the “App Store” trademark used in Amazon’s developer portal. The Amazon Appstore for Android has since gone live.

Not only do they believe Amazon is violating trademark law, Steve Jobs and company are also nervous that Amazon’s lackluster software hub will give their App Store a bad name, literally. They filed a counter claim on Wednesday, once again asking the court to bar Amazon from using the term “App Store.”

Apple believes that the Amazon Appstore is an inferior service, and fears it will tarnish the the reputation of the well-known “App Store” moniker. They even outline some of its issues in the filing, noting weak security parameters and malicious apps.

Of course Amazon’s argument continues to be that the term “App Store” is generic, and can’t be owned by an individual entity. That would be like owning the words “birthday” and “hat.” If that were the case, then we’d have to worry about companies like Lodsys suing us for using them without a license. What a world.

Thoughts? Should Apple be granted sole ownership of the term “App Store?”