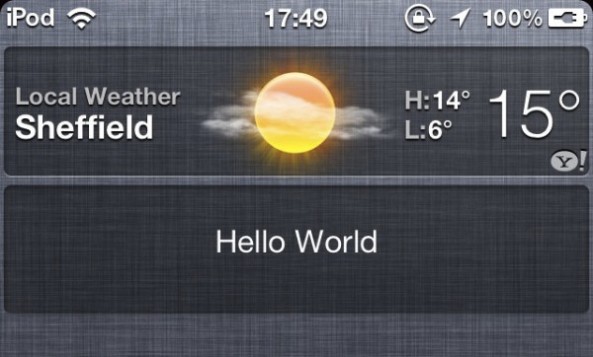 When the iOS 5 Notification Center was unveiled by Scott Forstall at WWDC, the possibility of third party widgets was also teased to developers. Although no public SDK for widgets was announced by Apple, the first, non-Apple widget has been successfully added to Notification Center, thanks to the RedSn0w tethered jailbreak that recently got updated for iOS 5.

Developer WillFour20 was able to dig into a jailbroken version of the iOS 5 SDK. He uncovered the ability to add his own widget, and he demonstrated it with the above: “Hello World.” Thanks to this discovery, developers with jailbroken iDevices will be able to start developing and testing widgets for iOS 5…

Apple is still silent about whether there will be a public API for widgets in iOS 5, but WillFour20’s discovery proves that developers don’t technically need an Apple API to create widgets.

The “Weather” and “Stocks” widgets currently ship with iOS 5 Beta 1, and Apple will most likely add more of its own widgets in future releases. Developers obviously want the ability to create widgets (a streaming Twitter feed widget would be super cool), and all Apple needs to do is open the API so that devs don’t have to use the back door that jailbreaking provides.

It doesn’t really make sense for Apple to introduce the concept of widgets in iOS and only offer two. Widgets will most likely be distributed in the App Store under Apple’s watchful eye. Apple is probably working on adding infrastructure for widget distribution in the App Store as we speak.

For some reason, widgets in Notification Center are currently only presentable on the iPhone and iPod touch. Apple will hopefully open up widget access to the iPad in the next iOS 5 beta.

Widgets have been available to jailbreakers for quite some time, thanks to apps like LockInfo.

Are you excited for widgets in iOS 5? What types of widgets would you like to eventually see in the App Store?