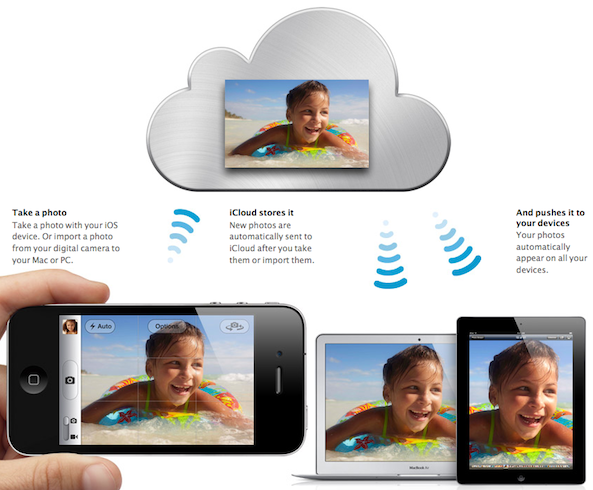 Syncing photos from your iPhone to your desktop and other devices has always been a bit of a pain. Most iPhone users have taken to services like DropBox to upload photos to their desktop, to avoid the old plug-and-play method.

What if you wanted to show off your iPhone photos on your iPad? In the past you had to upload the photos to your desktop and then sync them to your iPhone using iTunes. The new iCloud feature Photo Stream takes away all of the headache with instant, wireless photo syncing…

We’ve seen hints of the Photo Stream feature found deep within the code of previous versions of iOS, but we had no idea what the service entailed. Basically it’s a way to instantly share photos with all of your devices.

Once a photo is taken or imported via an iDevice, the picture is automatically uploaded to your Photo Stream. iCloud stores every photo for 30 days and every iDevice will store the last 1000 snapshots. Of course your Mac or PC will still store all of your pictures.

There will be a new button in the iOS Photo app that will take you right to your Photo Stream on your iDevice. Macs and PCs will also be given one touch access to the feature, along with Apple TV.

No more plugging your iPhone in and manually uploading your photos. No more selecting pictures one at a time to upload via DropBox. Photo Stream simply does it all for you, in typical Apple behind-the-scenes fashion.

What’s really cool is that your Photo Stream doesn’t count toward your 5GB of iCloud data, and of course it’s completely free.

What do you think? Are you excited about Photo Stream?