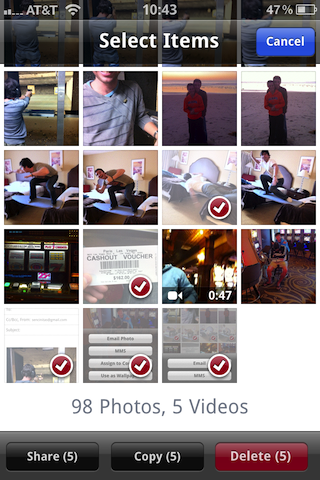 With an official demo still 2 months away, we can only rely on rumors and speculation to paint a picture of what iOS 5 might look like. Clues hidden inside iOS 4 can also help us predict future iOS characteristics. Some are found through hours of code searching, others are found by pure dumb luck.

9to5 Mac is reporting that one of their readers has stumbled upon some hidden clues in iOS 4.3 that once again point to the rumored Photo Stream feature. The reader uncovered the hidden references while browsing his photo library on his iPhone via a 3rd party editing app. What could these secret features possibly mean for iOS users?

It is speculated that Photo Stream will be part of a new MobileMe service, expected sometime this year. The feature, embedded into the native Camera and Photo apps, would be the easiest way to share photos from your iPhone.

No need to post pictures on Facebook or Flickr. Subscribers to your Photo Stream could just visit their native Photos app and check out your latest pics. Though traces of it remain in the coding of iOS 4.3, Photo Stream is no where to be found in the current iOS version. Did Apple pull it last minute in fear of another Ping episode?

Maybe they planned to have the new version of MobileMe out by early March, but experienced some delays. This would be another reason for them to pull Photo Stream from current firmware.

I want to know if we will see a revamped version of MobileMe this June alongside with the iOS 5 preview. If so, will Photo Stream finally make an official appearance?