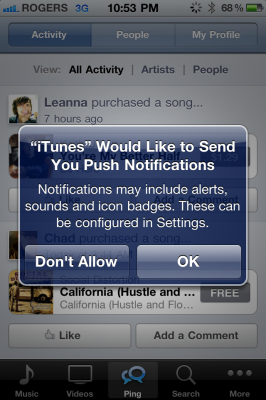 The new features found in the latest beta version of iOS 4.3 keep trickling out as expected, and it’s looking more and more like Apple wants to further establish itself in the social media circle.

For instance, the often mocked ‘Ping‘ — Apple’s music and social networking mashup — is now reported to send users push notifications when they receive news and alerts. But that’s not all of the goodies that Apple has tucked away in their latest firmware version…

Along with the Ping notifications, there’s also some new photo streaming features according to verbiage inside of iOS 4.3 beta 2. “Photo Stream uploads and stores the last thirty days of your photos on MobileMe and downloads them to all of your devices,” states text uncovered inside of Apple’s latest firmware.

Of course there will still be plenty of security features and privacy features tacked on as well, but this could effectively make photo sharing completely effortless. No logins, no manual uploads, just snap, and it’s there. Sounds like a winner to us!

Stay tuned for more inevitable leaks of new features found within iOS 4.3, as Apple is sure to drop another beta version in the near future.

What do you think about Apple’s upcoming foray into social media?