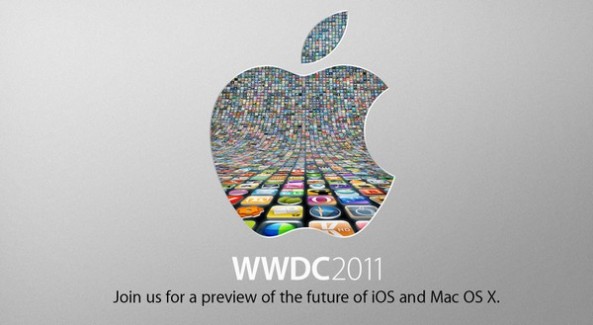 A couple of day ago, Alex told you about the rumors surrounding iOS 5, the iPhone 5, and more. Now it looks like some of those rumors are beginning to materialize.

The five day conference is a gathering of some of the biggest and brightest minds in the Apple development world, and in the past it has been ground zero for some of Apple’s biggest hardware unveilings as well.

This year, the big focus will of course be on Mac OS X Lion and another little release that goes by the name of iOS 5.

Check inside for the full press release…

CUPERTINO, California-March 28, 2011-Apple® today announced that it will hold its annual Worldwide Developers Conference (WWDC) June 6 through June 10 at San Francisco’s Moscone West. At this year’s five-day conference Apple will unveil the future of iOS and Mac OS®, including exciting demonstrations of the new kinds of apps that developers can build using Apple’s advanced frameworks and more than 100 technical sessions presented by Apple engineers.

“At this year’s conference we are going to unveil the future of iOS and Mac OS,” said Philip Schiller, Apple’s senior vice president of Worldwide Product Marketing. “If you are an iOS or Mac OS X software developer, this is the event that you do not want to miss.”

Mobile developers will be able to explore the latest innovations and capabilities of iOS and learn how to greatly enhance the functionality, performance and design of their apps. Mac® developers will see and learn how to develop world-class Mac OS X Lion applications using its latest technologies and capabilities. Developers can even bring their code to the labs and work with Apple engineers, applying development techniques and best-practices to enhance their apps.

Activities at Apple’s WWDC 2011 include:

more than 100 technical sessions presented by Apple engineers on a wide range of technology-specific topics for developing, deploying and integrating the latest iOS and Mac OS technologies;
over 1,000 Apple engineers providing developers with code-level assistance, insight into optimal development techniques, and guidance on how they can make the most of iOS and Mac OS technologies in their apps;
the opportunity to connect with thousands of fellow iPad®, iPhone® and Mac developers from around the world; and
Apple Design Awards which recognize iPad, iPhone and Mac apps that demonstrate technical excellence, innovation and outstanding design.
Go to the Apple Worldwide Developers Conference 2011 website (developer.apple.com/wwdc) to purchase tickets, as well as for updates and more information.

Apple designs Macs, the best personal computers in the world, along with OS X, iLife, iWork and professional software. Apple leads the digital music revolution with its iPods and iTunes online store. Apple has reinvented the mobile phone with its revolutionary iPhone and App Store, and has recently introduced iPad 2 which is defining the future of mobile media and computing devices.

Unfortunately this means that we have to wait over two months before we get any details about iOS 5. But hey, at least we know when we can expect it to be unveiled.

The big questions remain; will Apple go ahead and show off the iPhone 5 as they did with the iPhone 4 last year? Will iOS 5 be delayed until fall as rumors suggest?