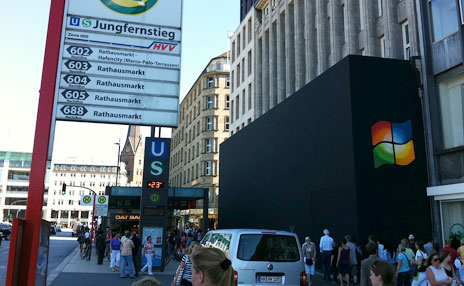 Apple’s iconic Apple Stores are known around the world, so much so that they stand out on the crowed streets even while they’re still under construction. Shrouded in black, there is no doubting when an Apple retail location is in the process of being put together behind closed doors.

That is, unless it has a great big Microsoft Windows logo stuck to the side of it…

That’s just what the people have Hamburg would have seen while they went about their business yesterday, after a yet un-opened Apple store in the city found itself the subject of a spot of vandalization – albeit of the comedic variety.

A group going by the name of the ‘.WAV Collective’ spied the telltale black boards hiding the impending Apple goodness and decided it needed a spot of color. After setting up a work area and donning high-visibility jackets the team took about their task of brightening up the store with their own particular brand of, well, branding.

Using pre-made pieces and a handy electric screwdriver, the comedians attached the famous four-pieced image we’ve all come to know of as the Microsoft Windows logo. It actually looks quite nice up there, but don’t tell Uncle Steve we said that!

After first seeing the photo of their evil deeds we thought it might have been fakety fake, but thanks to the wonders of modern technology the Collective has put together a nice little video to show off how they achieved their mission of turning an Apple Store into a Microsoft one.

Just a gentle reminder that there’s life outside WWDC, apparently.