An upcoming iOS 5 feature has been leaked in iTunes. Following the rumor that iOS 5 would offer over-the-air downloads for iOS updates, MacRumors has uncovered a new Apple feature called “Automatic Download.”

Currently, users have to manually update App Store apps. You can update one app at a time, or update all apps at once in the App Store app. Automatic Download would allow for OTA downloading and syncing of app updates in iOS…

“It also suggests that there is an Automatic Download setting for other items besides apps. Apple has been rumored to be making a push into over-the-air updates as well as some sort of wireless syncing.” 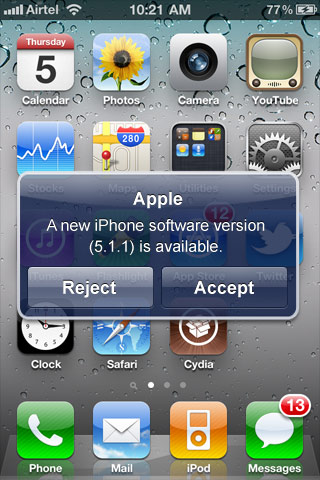 WWDC starts Monday, and Steve Jobs will be unveiling iOS 5 and iCloud. Apple is clearly aiming at making their platforms as ‘wireless’ as possible, and this uncovering shows one more feature coming to iOS 5.

The above iTunes leak is definitely legit, because the App Store went down for a short time after this leak was uncovered by MacRumors. Now, the message has been removed.

If you read sites like iDB, you probably update your apps much more frequently than most consumers. How do you feel about this feature coming in iOS 5?