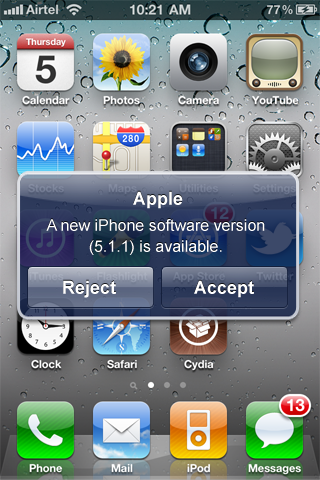 Most of you should be pretty familiar with the iOS update process by now. For anyone who needs a refresher, it’s quite easy. You simply plug your iDevice into a USB port on your computer, and initiate the update through iTunes.

Although Apple’s current method is fairly straight forward, competitors such as Google offer a more direct way for customers to get the latest software for their Android devices. I’ll admit OTA (Over the Air) updates are convenient, but are they really the best way to deploy updates?

According to 9to5Mac, Apple has been in talks with Verizon regarding wireless updates. Instead of users having to plug their iPhones into computers to update iOS, they will simply need to authorize the update from their handsets.

Although this feature is expected to appear in iOS 5, 9to5Mac claims that that there isn’t any word on whether Apple has been in similar talks with AT&T.

Mobile platforms such as RIM and Android have been using the OTA update method for quite some time, but it doesn’t come without its downfalls. Devices must have a good charge and be in an area with a good internet connection before attempting a wireless update. Any kind of interruption in the download can cause severe problems with a mobile OS.

The Apple TV currently offers an update method that doesn’t involve plugging the device into the computer, but with no 3G connectivity, you’re usually guaranteed a solid Wi-Fi connection for the download. In order for Apple to make OTA updates available to the iPhone, you would think they need to shrink down the update’s file size.

Currently, iOS firmware sits close to 700MB. I can’t imagine wireless carriers would approve pushing out a file to every device, nearly a gigabyte in size, every time Apple releases a new update. 9to5Mac notes that Apple could possibly start making updates much smaller by releasing incremental patches rather than full IPSW files.

I’ve personally had bad experiences with OTA updates on previous work phones. I had a Motorola Droid X rendered completely useless by a failed wireless update, so I am skeptical to say the least. This is Apple we are talking about though, and I don’t think they would stand for such imperfections. I guess we’ll just have to wait and see.

Are you excited about OTA updates? Could this change the landscape of jailbreaking?