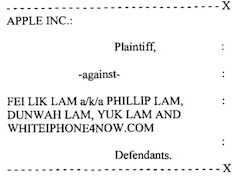 You might remember a few months ago, when we covered the story of Fei Lam, this kid who had made over $130,000 selling what he claimed to be authentic white iPhone 4 conversion kits via his website. Heck, the kid even sold a kit to Steve Wozniak.

According to MacRumors, Apple filed a lawsuit against Lam and his parents yesterday, “claiming infringement and dilution of its trademarks and engaging in deceptive practices through his conversion kit sales through his website at whiteiphone4now.com.”

Defendent Lam willfully and without authorization has used Apple’s trademarks in connection with the sale of his “White iPhone 4 Conversion Kits,” which among other things included white front and back panels with Apple’s logo and “iPhone” trademarks that are used in connection with the promotion and sale of Apple’s well known iPhone 4 handheld mobile digital electronic devices. Defendant at all times knew that Apple never has authorized the sale of white panels for its iPhone 4 mobile devices, and that he obtained these panels from sources that were not authorized by Apple or any of its suppliers to sell them.

Immediately after filing the suit, Apple filed a dismissal of the lawsuit, leading to believe that parties involved may have reached an agreement. Filing a dismissal allows Apple to file the claim again in the future if they choose to.

So why did Apple do that? My guess is that Apple wanted to send a chilling message out there to all the people involved in reselling trademarked parts without the company’s consent.

I think Apple did the right thing by not suing this kid to the full extent of the law. What do you think?