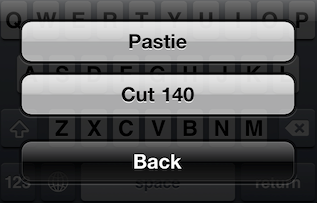 Another Twitter-related jailbreak tweak has hit the underground app store known as Cydia. With over 200 million folks using the social networking service, it’s a fairly popular target for developers.

From Moe Seth, the developer who brought you Photector, comes 140plus. This utility will allow users to continue tweeting, even when that pesky 140 character limit rears its head…

There’s really no magic behind 140plus. When you tweet a message longer than 140 characters, this utility will simply remove the excess characters and insert a link to a page with the complete message.

This mod falls in line with other Twitter client tweaks, it doesn’t have a home screen icon or settings tab. 140plus simply adds the ability to automatically post your longer tweets to Pastie.org, to the official Twitter client.

That’s right folks, the mod is only compatible with Twitter and not Tweetbot or any other 3rd party clients. Which isn’t a huge deal for most users, since apps like SimplyTweet already have TwitLonger integration.

I’m a Tweetbot believer so 140plus doesn’t really pertain to me, but for tweeters still tweeting with the official Twitter app, 140plus adds a handy feature to your client. The free utility is available in Cydia via the BigBoss repo.

Has anyone checked out 140plus yet?