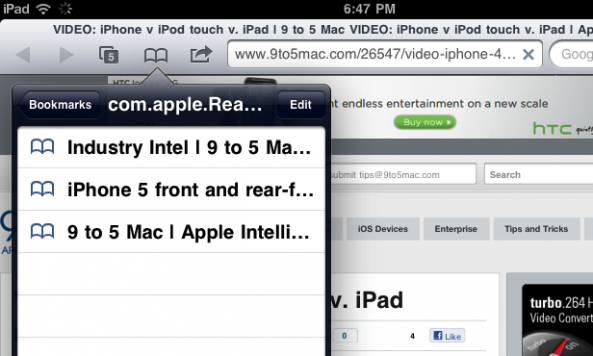 Apple’s next version of their desktop operating system, Mac OS X Lion, is nearing the final stages of developer beta testing. It is suspected that Apple will release the new OS to Mac users this summer.

More and more features are being uncovered in the developer builds of OS X Lion, and a recent finding points to a cloud-synced bookmark feature in Apple’s browser, Safari. The new “Reading List” feature in OS X Lion will allow users to wirelessly sync their bookmarked webpages with iOS devices.

“Our tipster claims that he was able to view his Reading List on his iPad via a MobileMe bookmark sync. Additionally, we have been able to confirm that Reading List sync is also an option through iOS’s standard iOS sync process. To access your Reading List on an iPhone, iPad, or iPod touch you need to head over to the bookmarks tab in Safari. Your Reading List should come up as a folder named, obviously a place holder, com.Apple.ReadingList.”

Although the discoverer of this feature used MobileMe to sync, there will most likely be a different backend in place for wireless syncing by the time OS X Lion launches to the public. MobileMe is basically dead, and Apple’s rumored ‘iCloud‘ service is expected to be announced soon.

Different web-based services have offered this type of syncing solution for quite some time. I use Instapaper and I couldn’t be happier. Other apps like Read It Later also let you wirelessly sync bookmarked pages across devices.