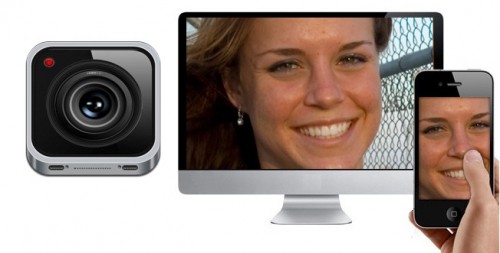 Apple’s TV line has been described as “just a hobby.” However, strong sales of the company’s 2nd iteration of the ATV has kind of changed the dynamics of the product.

AirPlay especially helped the Apple TV2’s sales out, along with the device’s $99 price tag. There are several apps available that take advantage of Apple’s AirPlay feature, but this one probably does it in the most unique way…

The Camera For Apple TV app does exactly what its title suggests. The application looks a lot like the standard Camera app, with the addition of the AirPlay icon.

The feature works just like it does outside of the 3rd party app. Just tap the icon, and select your Apple TV from the drop down list. Remember, both your Apple TV and iPhone have to be on the same Wi-Fi network. Once activated, the TV hooked up to your Apple TV will start to display a live video feed from your iPhone’s camera.

The video is viewable, but not nearly 720p. The app crawls over Wi-Fi with a very slow frame rate, but I could see you using it as a baby monitor like the App Store description suggests (provided your baby’s room isn’t very dark).

Although I own an Apple TV, I don’t really have a use for this application. The technology is entertaining though, and you can certainly play this app in a game of “can your smartphone do this.” If you want to check out Camera For Apple TV, it’ll cost you $1.99 in the App Store.

Have you tried this app yet? Do you use another app to stream live video from your iPhone?