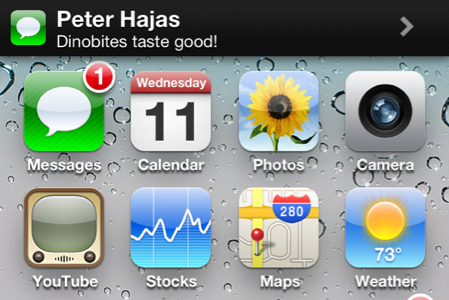 Peter Hajas is the genius behind a different take on the iOS push notification system called MobileNotifer. He’s a prominent figure in the jailbreak community with a wonderful, open-source philosophy on software.

In a recent interview with Joshua Tucker of ModMyi, Peter sat down and talked about some interesting developments. His amazing iOS notification replacement for jailbreakers, MobileNotifer, is entering its fourth beta with some awesome new features. Peter also talked about a very interesting new jailbreak project called “Widge.”

Check out the full, 15 minute interview after the break…

MobileNotifer is definitely the closest thing to a perfect system for notifications in iOS. If Apple redesigns the current push notification system to look anything like this, it will be fantastic.

Beta4 of MobileNotifer should be arriving very soon in Cydia (repo: phajas.xen.prgmr.com/repo). It will add:

Peter also plans on adding the “quick reply” feature that BiteSMS offers to jailbreakers for messages. We can’t wait for that.

Widge is a very interesting project that will allow users to install widgets for iOS in the Spotlight page of the iPhone’s home screen. From what Peter said in the interview, Widge will work much better than similar methods like LockInfo and will do much better with performance and battery life.

MobileNotifier Beta4 is probably one of the slickest and coolest extensions the world of jailbreaking has to offer. It’s iOS notifications done right.

What did you think of ModMyi’s interview with Peter? What about MobileNotifier? Are you excited for Widge?