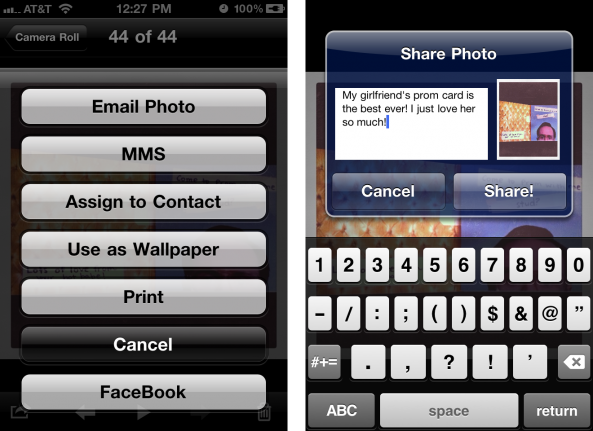 If you’ve been looking for Facebook integration in iOS, a new jailbreak tweak called FBUploader allows you to upload photos straight from the iPhone’s Camera Roll to Facebook. Typically, you would have to open the Facebook app, attach an image, add a caption, tags, etc. and upload from there.

With FBUploader installed on your jailbroken iPhone, you will have the option to upload to Facebook from inside the iPhone’s Photos app…

FBUploader adds itself to the bottom of the options menu in the Photos app. Once authenticated through Facebook Connect, you will be able to send your pics to Facebook with ease.

There are no new icons or settings to configure once the tweak is installed. When an image is attached, an accompanying status can be added before uploading to your Facebook account.

Check out this video demo:

FBUloader is pretty simple, and it offers integration with Facebook that Apple could implement in iOS 5. But that’s just speculation at this point. Apple is rumored to be introducing a feature dubbed “Photo Stream” in iOS 5 this summer.

This jailbreak tweak is nice, but it lacks two key features: batch photo uploading, and photo tagging. The developer has stated that he is working on bringing batch uploads to FBUploader in a future update.

FBUploader is available for $1.99 in Cydia.

What do you think of this tweak? Is it useful for you?