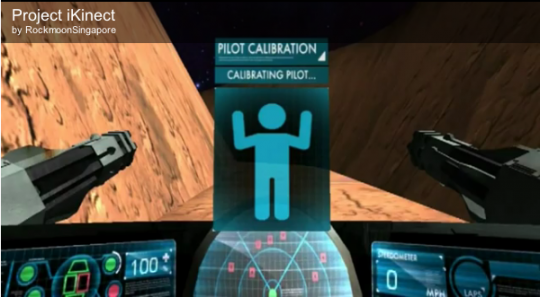 This one definitely belongs in the ‘cool concepts’ category. We’ve seen a lot of neat ideas involving the use of the iPhone outside its normal spectrum of capabilities. We’ve seen iPhones used in invisible instruments and 3D modeling, but we’ve yet to see something like this.

Rockmoon Singapore is a serious mobile game development company based out of… Singapore. While they develop for all major mobile platforms, they have a preference for iOS. What have they been working on lately?

A few days ago the company uploaded a video to their YouTube channel of an iPhone working in conjunction with a Microsoft Kinect motion sensor to play a prototype game, co-op style.

The demo is reminiscent of Star Fox, consisting of navigating a spaceship to infinity and beyond, while shooting enemies along the way. The cool part is that one user can control the guns and shoot down enemies using an iPhone, while the other can steer the spacecraft with their body movement using the Kinect.

This iKinect project is just a prototype and will probably never make it to market. However, the company’s primary objective (per their website) is to “pioneer the future of serious gaming,” so I don’t think this is the last we’ve heard from them.

What do you think? How does iKinect rate on your cool-o-meter?