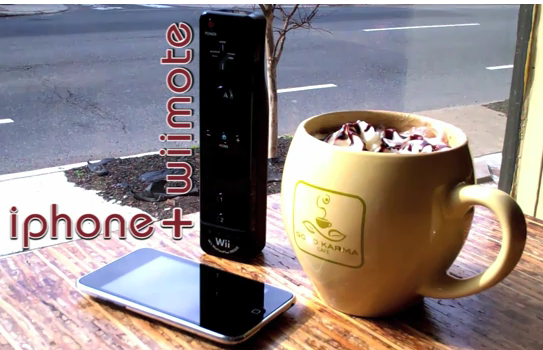 It seems like you can never get enough high-tech innovation, especially when it involves using ordinary products to accomplish extraordinary things. We’ve shown you 3D graphics on the iPhone 4 in the past and even lenses that give the iPhone 360-degree video capturing abilities. What could they possibly come up with next?

Let me introduce you to Tim Soo. On top of being a medical student, he also happens to be a hacker/musician. His Kickstarter video asking for donations to fund an interesting project has really been making its rounds on the internet recently…

The idea for the “invisible instrument” is very simple. Soo has taken an ordinary Wiimote and a standard iPhone and paired them both via bluetooth to a computer. With their built-in accelerometers, computer software can read the devices’ movements and translates them into different sounds.

Soo wants to release an application for the App Store that will turn your iPhone or iPod touch into a motion-based instrument. When this app is used in combination with a Wiimote and complimenting desktop software, a user could recreate a variety of instrument sounds.

This, like other innovative demonstrations we’ve shown you, is not currently available for download. Tim Soo is currently trying to raise money to fund this project. The final date for donations is May 5th and he has only achieved half of his $10,000 goal.

If you would like to use this app in the future or just want to donate to the cause, head on over to Soo’s Kickstarter page. If you donate $10 you will receive the iPhone/iPod touch app and software bundle. If you donate $50 or more you will get an exclusive album of cover songs performed on the “invisible instrument.” Those that donate $1000 or more will get to choose an instrument for Soo to incorporate into his Invisible Instrument app.

Although I don’t possess any musical talent, I love messing around with apps like GarageBand. This, however, seems a bit too complicated for me to piddle around in. Nevertheless, the technology behind this is pretty impressive.

Would you use an app like this? Where does this rank among cool iPhone innovations?