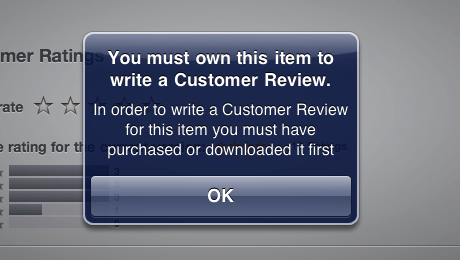 Apple has been ardently working on improving its App Store ranking and review system as of late. Just recently we reported that Apple had tweaked its ranking algorithm in an effort to improve the legitimacy of App Store rankings.

Now another new policy to help support their efforts has apparently gone into effect. Any app that has been obtained by means of a developer promo code is no longer eligible for review.

In fact, Apple explicitly states that if you want to review any such app, you will need to actually purchase said app…

In a recent post on the Touch Arcade forums, one of their members posted an email that was allegedly from a representative from Apple. In the email the rep provides a response to the poster’s question as to why they can no longer review apps obtained via promo code:

So while gift cards, gift certificates and other payment options remain valid means of establishing a review, providing a review by way of a promo code is no longer valid.

To be honest I’m surprised that Apple didn’t establish these guidelines a long time ago, but it’s evident that they’ve only just recently begun taking the App Store review methodology seriously.

Perhaps Apple’s lawyers suggested that they tighten the reigns a bit to avoid any potential lawsuits.

What do you think? Do you appreciate Apple’s attempts to better App Store reviews?