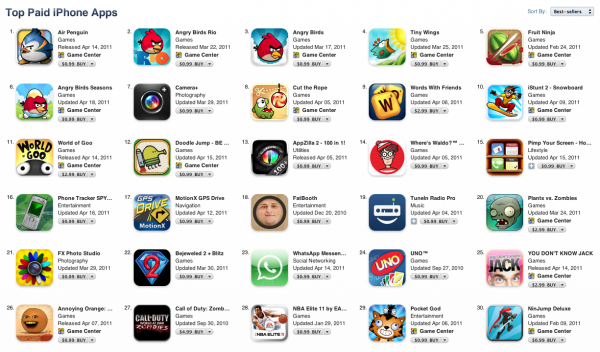 Apple has allegedly changed the App Store’s ranking algorithm to factor in more information than just download numbers. In the past, App Store chart rankings have been based off pure downloads alone. If an app sold a lot of copies, it automatically shot to the top of its respected chart.

User engagement seems to be the reason behind Apple’s algorithm tweak. Instead of only download numbers, the App Store now seems to be recognizing an app’s true popularity…

“According to Inside Mobile Apps, several ad network and pay-per-install executives have noticed a change with the App Store rankings, though it’s too early to say what these changes are based on. Peter Farago, vice president of Flurry, said it’s clear that Apple is using more than download numbers, which he welcomed because it spoke to the true popularity of an app. It’s possible that Apple is now factoring in ratings and daily use into its rankings, said Inside Mobile Apps. I’ve reached out to Apple and will update if and when I hear something back.”

The new ranking system seems to incorporate user ratings alongside general hits. That news could be either a good thing or bad thing, depending on how you view the quality of most user ratings.

Since the new algorithm tweak, same changes in rankings have taken place among the more popular apps,

“Facebook appears to be one of the winners from the reported algorithm change (which apparently occurred around April 13-14), jumping to the top of the free iPhone app rankings after sitting at #13. According to app tracker App Annie, Pandora Radio, another long-running app, also vaulted into the top ten from its perch at #22. Skype also moved from #33 to #15 and now sits at #11. These are popular apps that have been around for a while, but their sudden movement lends credence to the idea that Apple changed the ranking formula last week.”

Although the exact changes made to the App Store ranking system are unclear at this time, it seems apparent that customer engagement is a bigger part of the process than it once was. Perhaps this ranking tweak is a subconscious push from Apple to foster improvement in the quality of the App Store’s rating system.

As long as this new algorithm tweak better reflects an app’s true popularity, it will be a good thing for the App Store. Less spam apps will top the charts, and real, quality apps will get the opportunity to shine.

You can help make the App Store a better experience by leaving thoughtful and fair reviews/ratings for apps you download. Don’t trash an app in its ratings because you downloaded it by mistake. Be sure to make a fair assessment that will be helpful to the developer and other potential customers.