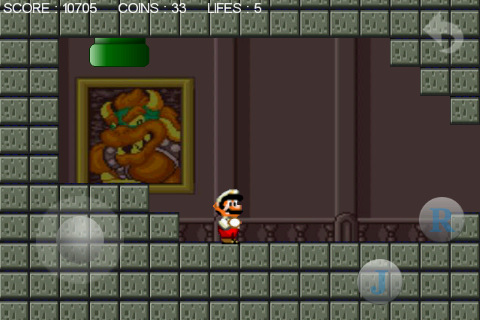 The application some how snuck into the App Store and has been making noise around the internet ever since. It isn’t garnering attention for its amazing game play, but for the amazing amount of copyright and trademark laws it seems to be breaking. How long do you think it’ll survive in the App Store?

Actually, Apple has already pulled the plug on the application, not even 24 hours after accepting it. This really makes you wonder how in the world it got approved in the first place. What Apple employee would review this app and think, “What a completely unique and original idea. This guy might really be on to something.”

You play as Monino, a mustache-bearing, overalls-wearing protagonist that is on a quest to find his sibling who has been kidnapped by a turtle-monster named Bowler. You travel through pipes to reach exterior parts of each level, and shoot fireballs at mushroom-shaped bad guys.

For folks who couldn’t grab the app while it was still up, you aren’t missing much. The touch-screen controls on the app are so poorly done. You’re better off playing one of the many emulators available in Cydia.

While this game is terrible by all measures, it sold ridiculously well for the short time it was available. I wonder if Nintendo is taking note of its popularity. Since Sony recently announced that it is bringing some of its gaming titles to the Android platform, there have been a lot of people wondering if Nintendo might make a similar move with iOS.

I don’t see that happening, given the increase in competition iDevices has given Nintendo over the last few years.