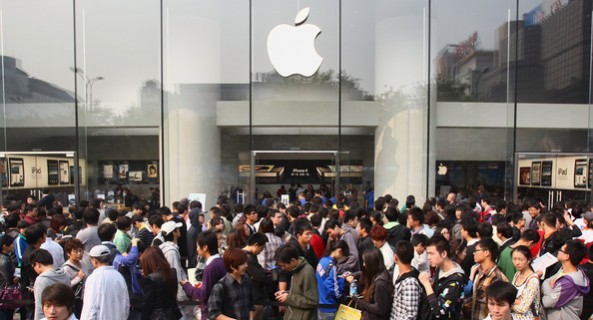 In Apple’s Q1 earnings call, the company released very impressive numbers for its sales in the first three months of 2011. The iPhone’s fastest growing market is China, with an over 250% increase in iPhone sales since this time last year.

China is a major hub for technology and smartphone innovation, and most iPhone knockoffs are Chinese-made. 10% of Apple’s revenue comes from China (to the tune of about $5 billion). The iPhone is doing extremely well; now accounting for 8.3% of China’s 850 million mobile customers.

“It’s unclear, however, where in China the device is selling the most. Cook’s reference to Greater China includes the mainland, Hong Kong and the island of Taiwan, said Apple spokeswoman Carolyn Wu.

But analysts have said that in mainland China, Apple is seeing a major shift with how consumers are viewing the iconic smartphone. When Apple’s iPhone 4 launched there in late September, it was a hit with Chinese consumers, quickly selling out and leading to shortages.”

The iPhone is seen as a status symbol in China (as it is in the U.S.), and the wide range of fake iPhones available point to the device’s influence on the Chinese culture.

China didn’t get the iPhone until 2009, and Apple originally had to sell the smartphone without Wi-Fi to comply with Chinese regulations. The iPhone 4 was able to be sold with Wi-Fi capability, and the iPhone has gained a 2.8% increase in market share since its release. That may not sound too significant, but when you take into account 850 million customers, the numbers are rather impressive.

Macworld shares some insight from the managing director for a Beijing-based research firm,

“The iPhone 4’s appealing features and user interface have made it an attractive smartphone for buyers in China, Natkin said. Furthermore, the device is a status symbol in China, he added.

“If you look at the Apple experience store in Beijing, it’s packed everyday,” he said. “People have a very high regard for the Apple brand and for its ability to innovate.”

Apple is definitely happy that the iPhone is doing well in China, but they’re probably not too happy about the vibrant black market that exists for knockoff devices.

What do you think? If you live in China, let us know how you see the iPhone’s influence in your community.