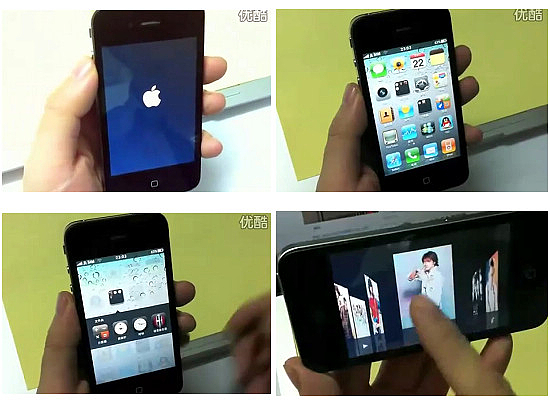 There are plenty of fake iPhone knockoffs, like the HiPhone 4G. Apple has sued many manufacturers around the world for clearly cloning the iPhone or stealing some of its key features.

China has always been the largest hub of fake, knockoff gadgets. If you visit China, chances are you will find all the recent models of mobile phones cloned and selling at less than half their original prices. Because the iPhone’s appeal is at a global level, it is becoming increasingly difficult for Apple to crack down on all of these little companies overseas that are creating knockoff iPhone models.

The Sophone is by far the best iPhone 4 knockoff of 2010. It didn’t receive American coverage until late December, but the device has been a huge hit in China. It copies the iPhone 4 in almost every way imaginable. The way that the Sophone identically mirrors the iPhone 4 is unbelievable. You really have to see it to believe it…

The Sophone is definitely the most similar clone of the iPhone 4 ever made. Besides identically matching the iPhone 4 in external design, the device’s interface can hardly be distinguished from iOS.

I couldn’t believe my eyes when I saw the demo. It’s hard to believe that the Sophone is not the real iPhone 4. Where the Sophone really differs from the iPhone 4 is in its specs and internal configuration.

Instead of Apple’s A4 ARM chipset, the Sophone is operating on the MTK6235 chipset. The Sophone has a 3.5-inch (480 X 320 resolution) capacitive touchscreen, and only 4GB of flash storage. There is a front and rear 2 megapixel camera, Wi-Fi, and Bluetooth. A huge pro to the Sophone is its removable SIM card and 1400mAh battery. The handset supports GSM and WCDMA.

The Sophone has the exact physical dimensions of the iPhone 4. That means that any iPhone 4 case will fit the Sophone. The only major con of the Sophone is its lack of retina display and a micro SD card slot.

The makers of the Sophone apparently have a sense of humor. They are dedicating the Sophone as a salute to Steve Jobs.

The Sophone sells for 1380 Chinese yuan, or about $209. It’s not cheap like most knockoffs are, but the Sophone definitely deserves its spot as the best iPhone 4 knockoff of 2010.

We’re excited to see what iPhone knockoffs come out in 2011. Hopefully devices like these push Apple to innovate and not get lazy.

What do you think? Did you see any actual difference between the Sophone and iPhone 4 in the demo videos?