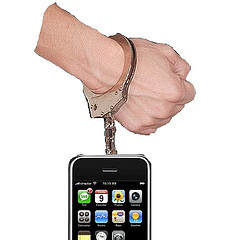 It’s no doubt that Apple products tend to stand out. They are very sleek and expensive-looking, and also worth a lot of money. All of these characteristics make Apple products a target for thieves looking to make a quick buck.

We’ve reported on Apple retail locations getting robbed in the past, but we haven’t ever heard a story quite like this. Cult of Mac is reporting that a Chicago woman died yesterday due to injuries she suffered in a mugging that occurred Monday afternoon….

Sally Katona-king, a 68 year church receptionist, was on her way home from work Monday when tragedy struck. The woman was using her iPhone on the Fullerton Station platform in the Lincoln Park neighborhood, when a thief came up behind her and snatched her iPhone.

As he ran off, the assailant knocked Sally off of the platform and down the station stairs. Hospital officials believe it was the head injuries she sustained that afternoon that lead to a cerebral hemorrhage that ended King’s life yesterday afternoon.

Although the police have yet to find the suspect, they are hoping video surveillance footage from the Fullerton Station will help them find the mugger. Chicago Police detective Gary Yamashiroya told the Chicago Daily that this crime reflected a growing trend of smartphone thefts in the city.

I can’t believe a woman is now gone because some guy wanted to hawk a used iPhone for a couple hundred bucks. If you ask me someone needs to turn on Find My iPhone and catch this jerk.

What are your thoughts on this tragedy?