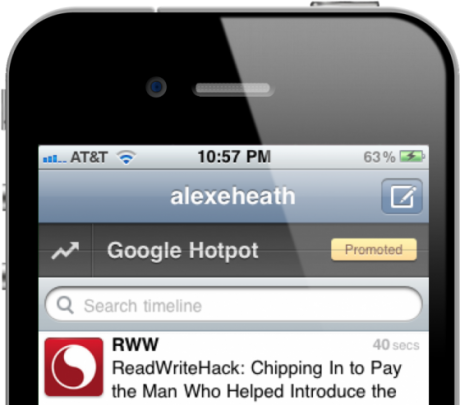 Remember when the official Twitter app added the .. er.. Quick Bar in a recent update? The Quick Bar was Twitter’s attempt at “sharing information” with users. It was also a clever revenue option for displaying promoted tweets.

Twitter has finally killed the Quick Bar. After a brief and painful run, the Quick Bar has been removed from the official Twitter app in a new update.

Originally, the Quick Bar stayed at the top of the tweet timeline and scrolled through various trending topics and promoted tweets. There was such a severe backlash from users that a jailbreak tweak for disabling the Quick Bar was released less than a day after the app update was pushed.

Twitter got the message loud and clear. They pushed another updated that fixed the Quick Bar’s position at the top of the timeline. That way, you would only see it when you scrolled to the top of your feed.

The main problem with the Quick Bar was that it couldn’t be turned off. It just sat there, like an immovable couch potato, taking up space with it’s random hashtags.

“Rather than continue to make changes to the QuickBar as it exists, we removed the bar from the update appearing in the App Store today. We believe there are still significant benefits to increasing awareness of what’s happening outside the home timeline. Evidence of the incredibly high usage metrics for the QuickBar support this. For now, we’re going back to the drawing board to explore the best possible experience for in-app notification and discovery.”

The latest, Quick Bar-less update for the official Twitter app can be downloaded in the App Store.