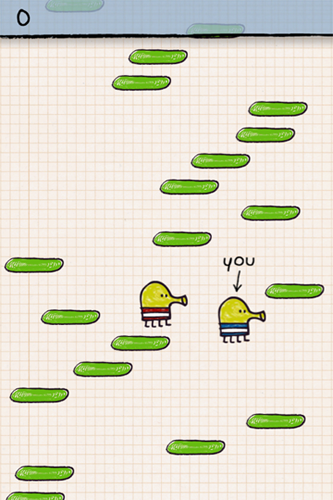 Doodle Jump has been one of the most popular iOS games ever since its launch, and it has received several updates throughout the year. The latest update brings one of the most highly awaited features: online multiplayer.

The player that hits the 12,000 foot mark first (without falling or being knocked down by an enemy) wins. All the power-ups are removed in multiplayer mode, except for springs. which can only be used once, making the game very challenging.

Online multiplayer mode worked flawlessly for me and finding a match only took seconds. Highscores can be tracked via the online leaderboard available in Game Center.

The update is free for users that already have Doodle Jump and $0.99 in the App Store for first time buyers.

Have you tried Doodle Jump online yet?