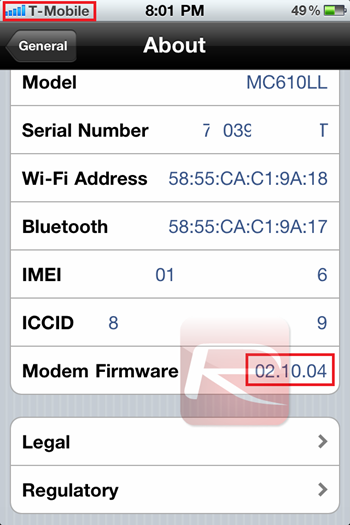 Last week, the Gevey Team announced their SIM Interposer for the iPhone 4. This SIM Interposer would provide the long awaited iPhone 4 unlock or Baseband 2.10.04 and 3.10.01.

Although there was some speculation as to whether this SIM Interposer was legit or not, today a reader over at Redmond Pie has provided evidence showing an iPhone 4 with 2.10.04 baseband running on T-Mobile USA’s network using the Gevey SIM Interposer.

As a refresher, Gevey’s SIM Interposer works by adding a EEPROM chip to your SIM card just like a TurboSIM. You then call 112 from the iPhone Dialer, and once the call connects you hang up then toggle Airport mode on and off. When the network connection resumes you will be unlocked. Basically, it works by forcing the activation of the baseband using the emergency dialer.

As we’ve mentioned before, for those tired of waiting for an iPhone 4 unlock this may be a possible solution, although since it is questionable whether it’s legal or not we would not recommend it. We would recommend you wait for details on the upcoming possible permanent unlock solution from the Dev Team.

I have ordered one for my iPhone 4 on 3.10.01 baseband, and will report back once I have tested it out for myself.

If you’ve tried the SIM Interposer, be sure to leave your thoughts in the comments!