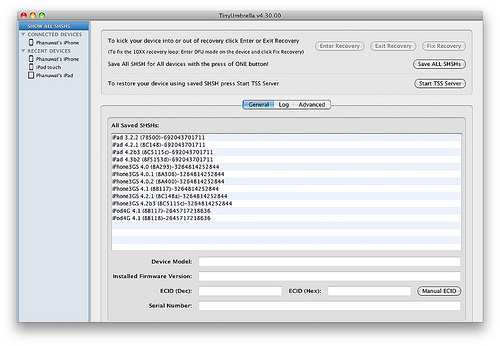 Now that the official version of iOS 4.3 has been released, @notcom has released an updated version of TinyUmbrella to support the new firmware.

In addition to iOS 4.3 support, the updated TinyUmbrella (version 4.30.00) also brings iPad 2 support for all models (WiFi, CDMA, and GSM), and a new tweak requested by the creator of Cydia, @Saurik. Notcom also mentions that users who do not update to the latest version of TinyUmbrella, may experience significant slowness when saving their SHSH blobs in the future…

TinyUmbrella now supports all three new models of iPad 2. I’ve also added a much-needed tweak per saurik’s request. If you don’t update to the latest version, you may experience /significant/ slowness when saving your SHSHs in the future. With this release, 4.3 is supported. I plan on making some changes to the UI to help out the poor saps stuck on vertical resolutions < 900. I’m also going to be removing the proxy section of the app and simply using the system proxy settings.

As a reminder, to save your SHSH blobs, simply connect your iDevice via USB to your computer, launch TinyUmbrella, and click the “Save SHSH” button.