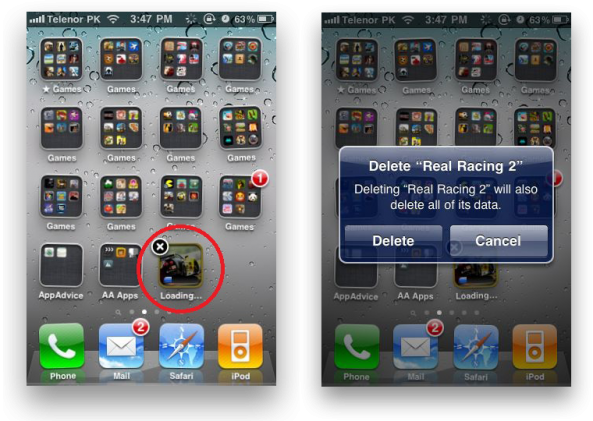 Apple recently seeded the newest iOS 4.3 beta to developers. We showed you a preview of the multitouch gestures that Apple is working on for iOS 4.3, but there haven’t been many more features uncovered.

However, a new and nifty feature in iOS 4.3 has been unearthed by AppAdvice. In iOS 4.3, you will finally have the ability to cancel an app from downloading and installing. As of right now, you can only delete an app from your iPhone’s home screen once it has fully downloaded and installed….

While this addition isn’t necessarily a huge feature in 4.3, it’s nice to see that Apple is cleaning up their mobile platform and adding the utility options that should natively be there.

This new feature will work just like the already existing process of deleting apps on the iPhone, only now the red “x” will appear over currently downloading/installing apps. You will be asked to confirm your delete request, and your download will stop before the app can finish installing.

This option is a great addition to iOS 4.3. It’s quite common for me to begin downloading an app that is too large to wait for on my 3G connection. Sometimes I buy free apps by mistake as well.

Hopefully Apple will implement some type of refund system into the App Store so that you don’t end up wasting your money with cancelled downloads.

There are no stable jailbreak solutions for the current version of iOS. Rumor has it that iOS 4.3 will be accompanied by the next major, public jailbreak tool.

Does this addition to iOS 4.3 sound useful to you? Have you run into the problem of needing to cancel an app download midstream?